As an RNA virus, SARS-CoV-2's genome replication is innately error-prone such that mutations are expected (1). Every now and then, a mutation will provide an adaptive advantage (such as increased transmissibility or infectivity to a human host), and will be positively selected for in the population. This process drives viral genome evolution, and gives rise to the rich diversity of viral strains and lineages that we see. However, for SARS-CoV-2, the unexpected emergence of such diversity since late 2020 has led to considerable anxiety around the progression of disease, and the efficacy of diagnostics and vaccines to control its spread.

On April 22, Public Health England published update 9 of the SARS-CoV-2 Variants of Concern (VOC) and Variants Under Investigation (VUI) in England-Technical briefing. Some good news is that there are no known Variants of High Consequence (VOHC) in circulation today. This technical briefing is a great resource for understanding emerging variants. There has been much reported in the news (2,3) about a "Double Mutant" variant in India, and so I was eager to read more about this strain B.1.617.1: its genomic profile, phylogeny and biological characterization in the tech briefing.

I was struck with the familiarity of the mutations in B.1.617 India variant. These are the same "cast of characters" as we have seen in other variant strains of concern, mutations in the same amino acid positions that keep coming up, either in different combinations or as different amino acid substitutions. 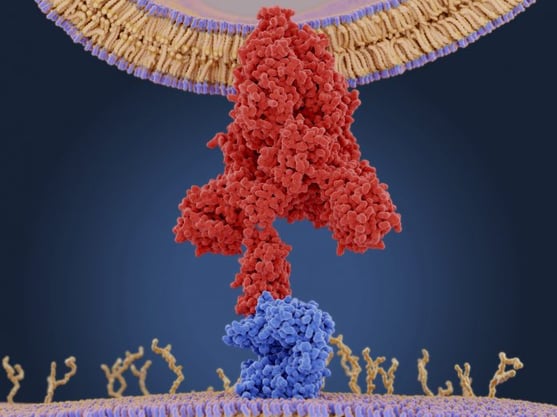 Figure 1: Molecular model of spike (S) protein (red) bound to an ACE2 receptor (blue) on a human cell. Picture taken from (4). While lineage-defining mutations arise throughout the SARS-CoV-2 genomic RNA affecting all of the viral proteins, primarily only mutations in Spike gene so far have arisen repeatedly in independent lineages. The E484 and L452 mutations discussed in the B.1.617 India variant are at the spike protein surface that actually makes contact with the ACE2 receptor.

These examples in B.1.617 India variant are not unique. Spike position Q677 has mutated to either H or P in at least seven different lineages, and S-677 mutants have increased prevalence about five-fold worldwide (7). Similarly, spike deletion ΔH69/V70 is present in at least 28 SARS-CoV-2 lineages (8). Now, SARS-CoV-2 variants of concern (VOC) and variants under investigation (VUI) in England-Technical briefing 9 reports that in addition to the very common N501Y mutation that initially defined the B.1.1.7 "UK variant", there is now a N501T mutation being monitored from sequences from Belo Horizonte, Brazil.

The same mutations showing up again and again suggests convergent evolution. Convergent evolution is when the same trait emerges in different independent lineages over time. Large-scale genome sequencing of viruses from hundreds of thousands of patients (as cataloged in the GSAID database) enables these convergent patterns to be identified. Most mutations are onetime events that arise in a patient and go extinct, but some establish new lineages that become more frequent as the virus succeeds in replicating and infecting many people (7). Immunocompromised patients have been documented to produce multiple mutations over time (9). These new lineages are identified as VOC because they are often responsible for COVID-19 surges. If mutations in the same amino acid position arise repeatedly around the world and become more frequent, this mutation very likely encodes an adaptation that helps the virus reproduce and transmit. By looking at the defining mutations across the VOC lineages we can understand which positions are important for viral fitness.

Reflecting on the variants discussed in this technical briefing, I felt encouraged that there appears to be a limited list of variants that affect viral transmissibility and virulence. Instead of an endless flow of new variants that are completely unpredictable, natural selection has already indicated the amino acid positions that need to be on our radar for close monitoring and surveillance.

Monitoring and surveillance of emerging variants can be performed using high throughput probe-based RT-PCR genotyping assays or using whole genome sequencing (NGS). Regardless of the method, variant surveillance testing requires use of quality control materials to optimize assays, ensure sensitivity, and monitor daily QC. LGC SeraCare produces SARS-CoV-2 reference materials utilizing proprietary AccuPlex™ technology. These recombinant viral particles are fully encapsulated like the SARS-CoV-2 pathogen, so must go through an extraction process before nucleic acid detection, but the viral particles are replication defective for safe handling. AccuPlex SARS-CoV-2 variant reference materials are currently in development. The materials will contain the full SARS-CoV-2 genomic RNA, and for the first product release, will focus on S-gene mutations in three prominent variants of concern (Table 1).

Table 1: Mutations and variant strains contained in the AccuPlex SARS-CoV-2 Variant Reference Material Kit. The kit has one vial for each of the three variants as well as a fourth wild type (reference sequence NC_045512) control vial.

With high quality and efficient testing for variants, combined with a deeper understanding of the critical amino acid positions for increased viral fitness, communities can react to new strains appropriately and when needed, implement quarantine measures more effectively.