I’m excited to be at the Annual AACR meeting at the Georgia World Congress Center in Atlanta, GA. AACR is my favorite scientific meeting because each year I am inspired by the remarkable research presented and leave the conference feeling I’ve learned an incredible amount in just a few days. This year, I thought I would recap some of the most exciting and incredible talks for those who weren’t able to make it to Atlanta.

The highlight for me today was the presentation by Crystal L. Mackall of Stanford University in the Opening Plenary Session titled “Next-generation CAR T cells designed to overcome tumor resistance.” This talk was so compelling because Dr. Mackall presented experiment data showing that more effective cellular therapies for cancer are possible. 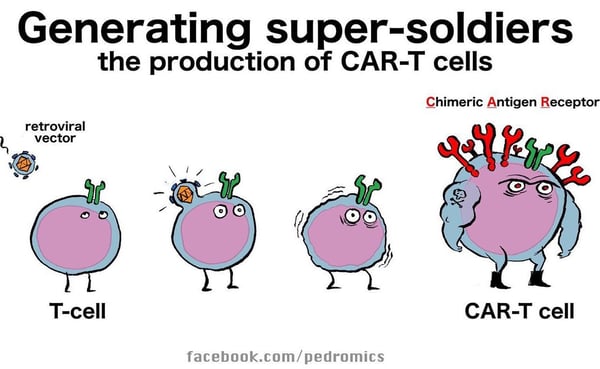 CD19 CAR therapy (chimeric antigen receptor T cell therapy) was the first FDA-approved cell therapy: Kymriah® was approved for children with B-cell acute lymphoblastic leukemia in 2017. Approximately 40% of patients treated have sustained disease control. This is an amazingly successful therapy, but still only a minority of patients benefit. Dr. Mackall’s talk first focused on why the treatment is unsuccessful in the ~60% who don’t have durable responses.

One reason that the CD19 CAR T treatment fails is tumor heterogeneity, i.e. the tumor changes so that it loses the CD19 antigen that is recognized by the T cell. This is also known as “antigen loss escape.” There may be selection of tumor cells with variant splice isoforms that lack the exon to which the antibody binds. Therefore, we need to be able to target more than one antigen. Another pan-B cell antigen, CD-22, was also identified as an effective target for CAR T therapy. However, the same issue of antigen loss or downregulation arises when patients are on the CD-22 therapy. Even a modest downregulation of approximately two-fold can make CAR T cell killing less effective. By generating CAR T cells with bivalent specific receptors to CD19 or CD22, the CAR T therapy can target two antigens simultaneously and overcome the problem of antigen loss escape.

The second reason that CD19 CAR T therapy fails is due to intrinsic T cell dysfunction and T cell exhaustion. T cell exhaustion is correlated with poor cellular expansion and early loss of the CAR T cells within the patient. T cells may already be exhausted at the onset of therapy, or because the tumor burden is so high that the CAR T cells are rapidly exhausted by the constant signaling.  PD-L1 checkpoint blockage can be helpful in relieving exhaustion but does not completely restore function.

Dr. Mackall’s lab has used an in vitro model for T cell exhaustion in which there are tonically signaling CARs which produce very little IL-2 and terminally differentiate. From this model, they have learned that T cell exhaustion is an epigenetic event. By using ATAC-seq studies, they looked at regions of the genome that are in open vs. closed transcriptional states in the exhausted state. They found that AP-1/bZIP/IRF transcription factors are over-expressed in exhausted T cells. They concluded that AP-1 transcription factors encode a transcriptional program that is inhibitory to T cell activation. Dr. Mackall went on to explain that while activation stimulatory factors like Fos and cJun may be present in exhausted CAR T cells, other potentially inhibitory AP-1 factors like JunB, BATF, ATF, and IRF are overexpressed to a greater degree, so it’s the imbalance of stimulatory and inhibitory AP-1 family members that may lead to exhaustion.

The real excitement of the talk came when she described how her lab has used c-Jun overexpression to restore the balance and reactivate exhausted T cells. C-Jun overexpression not only improves anti-tumor activity through IL-2 and interferon gamma cytokine production, but there is also less PD-L1 checkpoint expression. It appears to also help mitigate low antigen escape because the c-Jun-overexpressing cells can still activate killing even when the antigen is present at relatively low levels. These data provide hope that exhaustion-resistant CAR T cells may be possible, and may represent more effective therapy for patients.

We’re presenting our own exciting data on reference standards for TMB, liquid biopsy, NTRK, fusion RNA, and more at the AACR poster sessions. You can find a full listing here, and a form for free downloads.