Simply described, copy number variations (CNVs) are DNA segments present at a variable copy number in comparison to a normal genome. It was originally thought that a CNV consisted of a region of greater than 1 kilobases, however advances in technology have allowed for identification of CNVs as small as 50 basepairs1. CNVs are common, affecting a greater fraction of the human genome than single nucleotide polymorphisms (SNPs). CNVs tend to be found in segmental duplications, heterochromatic DNA, replication origins, and palindromic regions2. They can originate in the germline or accumulate as somatic variants, as a result of several proposed mechanisms. Although some genes can be deleted or amplified with no phenotypic consequence, there are examples of CNVs that play important functions in normal biological pathways, such as the amplification of ribosomal genes during early embryogenesis to increase production of ribosomes2. Alternatively, many CNVs are pathogenic and can cause disease, such as diabetes, autism spectrum disorder, Alzheimer’s disease, and cancer. 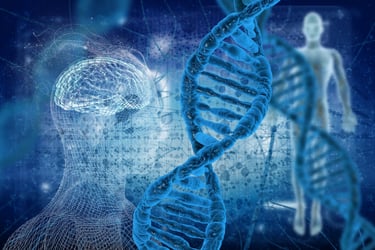 Amplification of oncogenes and deletion of tumor suppressor genes are often observed in tumor cells as drivers of oncogenesis, allowing for increased production of specific proteins for cancer formation and growth. Many examples have been identified in various cancers; amplification of EGFR in gliomas, MYCN in neuroblastomas, MYC in myeloid leukemia, and ERBB2 in breast, ovarian, and lung cancers, and deletions of PTEN, TP53, and VHL in a variety of cancers2. Whole chromosome alteration and focal CNVs have been linked to various cancers - often associated with unfavorable prognosis and drug resistance - hence detection and characterization of these types of genetic changes are important for personalized treatment. Methods for detection of CNVs have greatly improved since their discovery. Karyotyping and fluorescence in situ hybridization (FISH) were commonly used techniques after the discovery of CNVs. Later, array comparative genomic hybridization (aCGH) became the standard analysis method, with an initial resolution of about 1 Mb, improved initially to 50 kb, and more recently to single exons1. Additionally, many tumor profiling NGS workflows can detect CNVs in addition to SNPs, down to single nucleotide duplications and deletions.

As CNVs have become more easily detected in tumors, many links between cancer-causing CNVs and both increased drug efficacy as well as drug resistance have been observed2. ERBB2, which encodes a member of the epidermal growth factor (EGF) receptor family of receptor tyrosine kinases, is considered the "classic" breast cancer gene amplification.  Herceptin, an ERBB2 antibody-based therapeutic, was initially FDA-approved for treatment of breast cancer patients with ERBB2 amplifications in 2010. MET is also an oncogene that encodes a receptor tyrosine kinase that plays roles in cellular survival, embryogenesis, and cellular migration and invasion. MET amplification is an important driver for non-small cell lung cancer (NSCLC), targetable by MET tyrosine-kinase inhibitors, such as Crizotinib. The EGFR gene encodes an epidermal growth factor receptor that binds at least seven different ligands to trigger pathways regulating cell growth, proliferation, and survival. High copy numbers of EGFR are found in lung carcinomas, which respond well to drugs that block the catalytic activity of EGFR, such as Gefitinib and Erlotinib. Gene amplification is not always targetable for drug activity. For example, only a few copies of the gene CKS1B is associated with poor prognosis and reduced response to certain drugs. Amplification of antiapoptotic genes such as MCL1 and BCL2L1, cause increased expression of proteins that protect cells from chemotherapy leading to general drug resistance. Multidrug transporter gene amplifications like MDR1/ABCB1 also lead to reduced effectiveness of various drugs.

There is new evidence that CNVs can arise in response to therapeutic pressure and may not be homogenous across entire tumors, suggesting they are non-stochastic genetic events and more likely adaptive mechanisms for cancer cell growth2. Based on these findings, non-continuous drug treatment plans have been proposed to avoid CNV-containing cell selection. Monitoring of CNV content before and after a patient undergoes chemotherapy could help identify mechanisms of tumor relapse and aid in the design of better treatment plans post-chemotherapeutic pressure response.

One major challenge currently facing diagnostic developers and treating physicians that is imperative to overcome for personalized therapies to be effective is proper interpretation of diagnostic data1. Classification of CNVs can be pathogenic or high risk, but many are benign. Of course, the size, location, and genomic content of the CNV should be considered and variant databases can be useful in classification of CNV. A patient’s normal genetic background can be crucial and the genetic backgrounds of family members can be used for comparison to identify inherited, benign CNVs. Data sharing and a more structured approach to establish concrete links between relevant clinical information and genetic changes are necessary for the idea of precision medicine to become the standard of care.

Another challenge lies in developing and optimizing tumor profiling workflows to accurately detect and call CNVs. A powerful tool for overcoming this challenge is a well-characterized and reliable reference material. New Seraseq™ CNV reference materials for analysis of breast, lung and brain cancer samples have recently been released to aid clinical and molecular diagnostic laboratories as well as translational research scientists developing and validating NGS assays for tumor profiling and/or disease diagnostics. The Seraseq™ Breast CNV Mix  consists of three amplification levels of ERBB2, FGFR3, and MYC, while the Seraseq™ Lung & Brain CNV Mix consists of similar amplification levels of EGFR, MET, and MYCN. Biosynthetic reference materials such as the Seraseq line of clinical genomics products, have been shown to closely mimic cancer patient-like attributes, allowing researchers and assay developers to better design, develop, validate, and deploy new clinical assays in their laboratories.

Learn more about our CNV products by visiting our cancer genomics tools page.

Check out our new new eBook which focuses on the validation process for NGS-based assays and walks through key considerations and guidelines you can follow to ensure a successful validation, “Next-Generation Sequencing Assay Validation: A Practical Guide for the Clinical Genomics Laboratory.”