Microsatellites are simple tandem repeats that are present at millions of sites in the human genome.  Microsatellite Instability (MSI) is defined as a change of any length due to either insertion or deletion of repeating units in a microsatellite within a tumor compared with normal tissue.1 The molecular mechanism for the change in repeat length is slippage of nascent DNA strand with respect to the template strand during replication followed by failure to recognize the mismatch due to deficiency in mismatch repair genes.

Mismatch repair (MMR) proteins include MLH1, MSH2, MSH6, and PMS2.  These proteins are stable in cells only as heterodimers. Immediately after replication, the MutS complex (comprised of MSH2 and MSH6) recognizes the small loops indicative of mismatches. MutS recruits the MutL complex (comprised of MLH1 and PMS2) to assemble close to the mismatch, nick the DNA, and initiate repair of the mistake.2 Deficiencies in mismatch repair can be a result of inherited changes in the MMR proteins (Lynch syndrome) or due to acquired mutations or silencing of these proteins within a tumor (somatic changes). 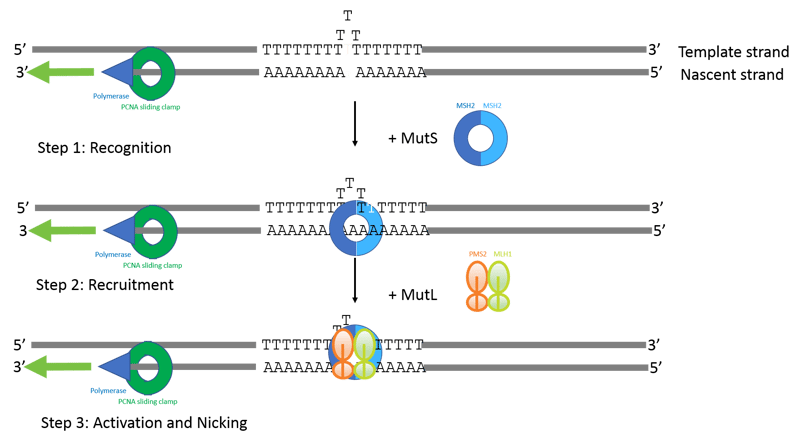 Figure 1:  Model of Mismatch repair adapted from references 2 and 3. The example shows a homopolymer of 18 Ts on the template strand that have been incorrectly replicated to generate only 15 as on the newly replicated strand. The presence of the sliding clamp PCNA, along with the nicks used to load the sliding clamp help to identify the nascent strand. MutS complex recognizes the small loop indicative of a mismatch and then undergoes an ATP-dependent conformational change which allows the MutL complex to bind. The MutS/MutL complex is thought to be able to translocate along the DNA, interact with PCNA, and induce nicking near the mismatch site. The nicks then recruit exonucleases and other proteins to remove and repair the mismatch.

There has been increased focus on identifying MSI-high tumors because of the correlation of MSI status and response to immunotherapy. Looking across twelve different cancer types, Dung Le and colleagues showed that cancers with MMR deficiency were sensitive to immune checkpoint blockade with anti-PD-1 antibodies5. Eighty-six patients with advanced, MSI deficient cancers were enrolled in the KEYNOTE-016 study and treated with the anti-PD-1 antibody pembrolizumab. Objective radiographic responses were seen in 53% of cases and 21% of cases achieved complete radiographic response. The authors performed deep sequencing of the CDR3 regions of the T-Cell Receptor gene (TCRseq) from three of the responding patients. They identified clones that were present at very low frequency (often undetectable) in the peripheral blood before pembrolizumab treatment, but had rapidly increased after initiating treatment. For one of these patients, they went on to functionally characterize the T-cell clone’s ability to bind mutant peptides. They tested the patient’s post-treatment peripheral blood for reactivity against the 15 top candidate mutation-associated neoantigens (MANAs) and found that some of the T-cell clones that expanded in response to therapy were specific for these mutation associated neoantigens. The study is significant because it provided supporting data for the hypothesis that the large number of mutant neoantigens in MMR-deficient cancers make them sensitive to immune checkpoint blockade. This trial and others eventually led to the FDA approval of pembrolizumab (Keytruda®) in May 2017: the first FDA approval of a drug based on the presence of a particular biomarker (MSI/dMMR) irrespective of tissue origin.

There are many ways that deficiencies in mismatch repair and the resulting microsatellite instability can be detected in the lab. IHC, targeting MLH1, MSH2, MSH6 and PMS2 is performed in many labs because of the familiar workflow. However, a proportion of mutations in MMR genes (1-5%) have a missense mutation that results in functional deficiency, but the protein retains immunogenicity and thus leads to false negatives by IHC6. PCR and capillary electrophoresis fragment analysis-based testing using Promega’s MSI Analysis System v1.2 has 5 mononucleotide targets plus 2 controls has been the gold standard and was used in the KEYNOTE-016 trial. The advantage of the PCR based MSI analysis system over IHC is that they are functional-based tests. As reported in the AMP 2017 meeting6, new PCR-based testing systems are in development (Promega MSI Analysis System v2.0) that use a panel of long mononucleotide repeats (52 to 60 base pairs long) as well as 4 of the 5 original markers from the original test kit (BAT-25, BAT26, NR-21 and Mono-27). Longer repeats may be more sensitive to deficiencies in mismatch repair7.

Increasingly, NGS-based MSI testing is being offered at a number of laboratories, including the OmniSeq MSI NGS test, FoundationOne CDx test and MSK-IMPACT test. The primary advantage of these NGS-based MSI detection assays is that they evaluate hundreds or even thousands of MSI loci, rather than being limited to the 5 loci assessed in traditional PCR-based tests. Additionally, assessing MSI using a “stand-alone” assay would be inefficient to perform on every cancer patient since only about 5% of cancers are MSI-high; however, NGS allows MSI detection as part of a more comprehensive analysis that includes assessment of driver mutations for targeted therapy and total tumor mutation burden. Another advantage of NGS-based MSI testing is that it does not require tumor-normal comparison, which is a major advantage for clinical labs8.

No matter the testing method, clinical testing for MSI has challenges.  PCR based tests screen a limited number of functional microsatellite markers (>10 sites in the genome). Changes can be subtle, and not present at the majority of loci tested6. For example, Yang Wang and colleagues showed that the mean shift in the five mononucleotide repeat markers: BAT25, BAT26, NR21, NR24, and MONO27 was only 3 nucleotides in endometrial cancer and that 76% of the time, multiple markers had shifts of only 1 nucleotide9. Additionally, changes can be tumor type specific10; for example, the genes frequently targeted by MSI in CRC genomes rarely harbor DNA slippage events in Endometrial Cancer genomes11. Therefore, testing only a very limited number of markers increases the risk of false negatives.

NGS may be preferable because it examines more microsatellite markers than PCR and may increase the sensitivity of the test for non-CRC samples12, 13. However, sensitivity at low allele frequencies may be limiting. Sequencing the MMR genes themselves is also challenging. Pseudogenes of PMS2 can present challenges. As shown by Talseth-Palmer and colleagues, obtaining desired effective read depth across the MMR genes also can be difficult. Large deletions may not be effectively called by some bioinformatics pipelines.

Well characterized reference materials can ease the testing challenges and give greater confidence in the results from both PCR-based and NGS-based tests. For PCR-based tests, they can help standardize the interpretation of fragment analysis electropherograms by different reviewers. For NGS-based tests they can help tune the bioinformatic pipeline and ensure run-to-run consistency. SeraCare’s VariantFlex library now contains both mutations in the key MMR genes as well as altered lengths of the most commonly assessed microsatellite loci (Table 1). Reference materials are offered in a customizable format that allows development, optimization, and bioinformatics tuning for either PCR or NGS-based test systems.

For more information on custom materials including key MMR genes and other key altered lengths for development, optimization, and tuning visit our VariantFlex NGS library page.