Jennifer Doudna is not a cancer biologist and joked that she might deliver her entire lecture at the 2018 AACR Annual Meeting without ever mentioning the word “cancer.” However, when presenting the Irving Weinstein Foundation Distinguished Lecture, she told a fascinating story about how curiosity regarding an interesting sequence motif in bacteria led to gene-editing tools, and how investigation of the mechanisms behind those tools may lead to innovative diagnostics for the future. 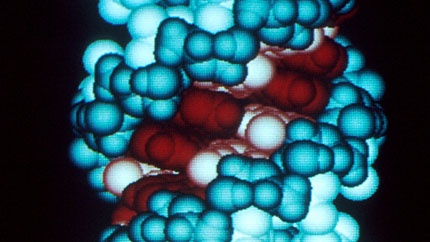 She related how CRISPR-CAS9 genome editing sprang from a collaboration with her colleague, Jill Banfield. She thought there was an RNA-guided event in bacteria and archaeal chromosomes serving as a bacterial defense against phage infection. When looking at sequence data from uncultivated microbes, the CRISPR array was discovered. It had integration of fragments of phage DNA flanked by repetitive elements. Curiosity about this array as a possible “bacterial immune system” led to the understanding that the array was transcribed to generate guide RNAs that bind to proteins. Together, the RNA/protein complexes scan the cell looking for homologous sequences. When they find these foreign DNA sequences that are homologous to the guide RNAs, the complex is able to deform the target DNA and make a double strand break.

CAS9 protein acts as an RNA-guided, DNA cleaver. In the bacterial cells, CAS9 is a dual-guided system, requiring both a guide RNA and a “TracrRNA.” In bacteria, once a double strand break is made in the phage DNA, the cleaved DNA is rapidly degraded so that infection is prevented. For laboratory applications, the guide RNA and TracrRNA can be linked—making a simple system to target a double strand break. In eukaryotes, when a double strand break occurs, it is repaired by either the error-prone non-homologous end joining (NHEJ) pathway or by homologous recombination. By providing a template for repair by homologous recombination, researchers can modify the locus to contain the desired sequences.

Since the initial discovery of CAS9 and similar proteins, the Doudna lab has focused on their mechanism of action and on additional applications for the technology. For example, one unanswered question is how CAS9 accomplishes DNA unwinding without an external energy source. CAS9 proteins undergo a large conformation change upon both guide RNA binding and formation of the guide RNA/DNA hybrid—yet these conformational changes and the resulting separation of the DNA double helix are accomplished without hydrolysis of either ATP or GTP.

Additional mechanistic questions have come up when investigating other members of the CAS family of proteins such as Cas12a (also known as Cpf1).This enzyme is naturally guided by a single RNA. The enzymes have a single active site that cuts both DNA strands (as opposed to CAS9, that has two separate cutters). How does substrate recognition affect cutting? Cas12a has double strand cleaving activity, but it also has a single-stranded DNA degradation activity. Whereas the double strand DNA cutting activity is constrained to one protein molecule cutting one bound DNA, the ssDNA cutting turns over rapidly, such that one activated protein can cut thousands of ssDNAs. She likened this to the Tasmanian Devil in the old Bugs Bunny cartoon—he could be somewhat polite and contained. But once his switch was thrown, he went into berserker mode and chewed up everything in sight. Cas12a protein may be able to go berserk because its single active cutting site may have flexibility to cut additional templates once activated.

Thus far, the story was interesting as it addressed how an obscure defense mechanism in bacteria had been turned into one of the most revolutionary tools for not only cancer research, but genomic research across biology. However, what made the tale memorable was how investigation into the detailed mechanisms of the process opened new doors for innovative applications.

By understanding that Cas12a was activated by a specific guide RNA and homologous DNA hybridization, but then the activated nuclease could repetitively cut unrelated ssDNA, led to an idea that this could be used to generate novel diagnostics. Her lab thought that such an activity could be used to make a fast, simple HPV identification test. They took human clinical swabs, treated them with proteinase K to release the nucleic acids, and performed RPA amplification (a simple isothermal amplification method). The lab then used CAS12a detection guided by a guide RNA homologous to HPV sequences. If the homologous HPV sequences were present in the original sample, the CAS12 enzyme would be activated. If a ssDNA reporter construct with a fluorescent label is introduced, degradation of the ssDNA reporter by CAS12a in berserker mode would release the fluorescent label. Since one activated CAS12a can degrade many reporter molecules, there will be a large amplification of the fluorescent signal. This technology can be very specific (e.g. distinguish between HPV16 and HPV18 sequences) and can be incorporated into point-of-care devices.

It is rare within one scientist’s career to see her work go from basic research into enzymatic mechanisms to the development of widely useful tools with profound impacts on diverse fields to then the application in medical devices impacting diagnostics and treatment. This is a truly inspiring story and one of the reasons I look forward to attending scientific meetings such as AACR every year.

To download our featured scientific posters presented at the 2018 American Association for Cancer Research Annual Meeting, click below.