In the course of patient care, formalin-fixation and paraffin-embedding (FFPE) of biopsy tissue samples are routinely performed, where these samples can be analyzed by histology and archived to link the sample with clinical long-term follow-up. With the development of advanced NGS-based oncology gene panels, it is becoming increasingly important to consider pre-analytic variables when extracting nucleic acids from FFPE-treated samples. This post covers frequently asked questions (FAQs) around the extraction of nucleic acids from FFPE samples for downstream NGS analysis. 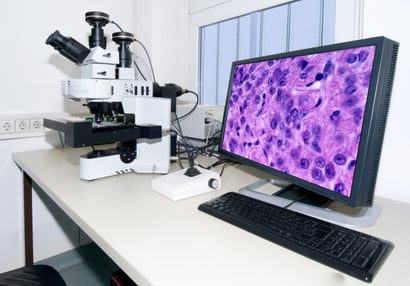 During the typical FFPE embedding process, a sample is first exposed to formaldehyde, which reacts with proteins and other primary and secondary amine-containing compounds. This reaction leads to extensive crosslinking, which stabilizes the structure of the sample for subsequent processing and histological analyses. Longer fixation times tend to lead to better stabilization for such analyses. However, longer fixation times also make the nucleic acids in the sample more difficult to access, and – ideally – fixation should not be carried out for more than 24 hours if the goal is to analyze the nucleic acids in the sample.

These can subsequently be cut into sections that are placed onto slides, or into tubes as curls. For histological analyses, 5 micron sections are typical because they allow for improved assessment of tissue and cell morphology compared to thicker sections. For next-generation sequencing (NGS) analyses, 10 micron sections are becoming more common because they contain twice the amount of sample – especially, when any microdissection is to be performed.

FFPE extraction reverses this process, although the reagents and steps differ between manufacturers. In all cases, it is essential to first remove paraffin in order to make the nucleic acids and proteins accessible to aqueous solutions. It is also essential to use proteinase K, protease, or similar in order to degrade the crosslinked structures surrounding the nucleic acids. If this reaction is not carried out to completion, then the ability to recover and analyze nucleic acids is compromised.

The following suggestions may improve the ability to extract nucleic acids reproducibly from FFPE curls.