This year's Association for Molecular Pathology conference was held in Austin Texas November 4-7 2015 had the theme of 'Realizing the Dream of Precision Medicine'. Here are a few of the presentations that stood out as outstanding, and the conference program indicates where the field of molecular pathology currently places its emphasis (which is primarily oncology) and where it may be headed in the coming years (including rare genetic disorders, non-invasive prenatal testing, and even a plenary on the human microbiome). 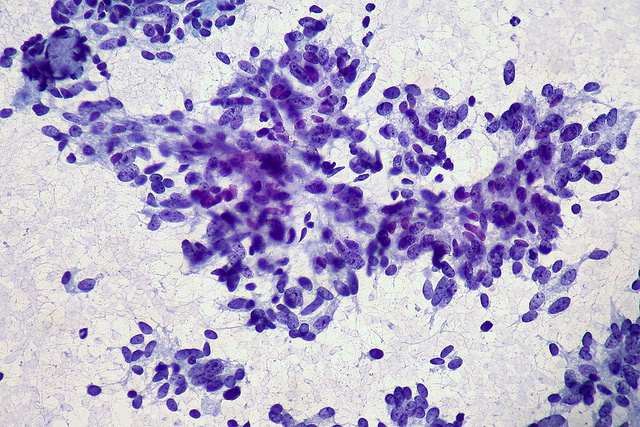 One memorable plenary presentation was an award presentation by Dr. Brian Druker of the Oregon Health Sciences University , Portland, Oregon entitled "Anatomy of a breakthrough - Imatinib as a Paradigm of Targeted Cancer Therapies". He began his talk in an unusual fashion, showing a movie clip from the 1940 film "Dr. Ehrlich's Magic Bullet" to illustrate the drama of infectious disease and the hopelessness of death due to infection, and assisted greatly in the 20th century with advances in sanitation and refrigeration in the 1920's, and subsequently antibiotics (1942) and vaccines (1955).

Chronic Myeloid Leukemia was described first in 1834 by Bennet and Virchow; Dr. Druker showed the title pages of their respective publications, published within six weeks of each other without typewriters or modern communications; apparently a debate ensued over the first publication date. Currently 15% of all leukemias, there are about 5,000 new CML cases per year in the United States. In 1960 bcr-abl (the 'Philadephia Chromosome') was first described, its mechanism by translocation discovered in 1973, and in the late 1990's a compound called STI-571 was developed by Novartis as a new class of cancer therapy, a tyrosine kinase inhibitor. Dr. Druker was the first to demonstrate the effectiveness of this compound (later called imatinib or Gleevec) against BCR-ABL-expressing hematopoietic cells.

Dr. Drucker mentioned that in 60% of CML patients there is a durable response, and showed a photograph of a woman who took a last family vacation when told she had CML and had a limited amount of time to live. Posing in front of a New Zealand mountain, she asked her loved ones that her ashes be scattered there. Returning to Portland, she enrolled in a clinical trial for Gleevec,. She became 'patient number 7' who is still alive today, 17 years later, still taking Gleevec on a daily basis.

He also discussed the use of imatinib with gastro-intestinal stromal tumors (GIST) where the mutated target was surprisingly responsive to the drug, and the molecular mechanism involved. It is of note that imatinib has not been effective for most common tumors, due to the fact that in other cancer types the tyrosine kinase mechanism blocked by imatinib isn't critically dependent upon it.

Another memorable presentation was by Dr. Lincoln Nadauld of Intermountain Health Systems of Salt Lake City, Utah, entitled "Role of a molecular tumor board in clinical cancer genomics". After sharing a review of tumor heterogeneity and tumor evolution, he suggested the converse of tumor evolution that he termed 'anticipation-based chemotherapy', where new alterations during tumor evolution can have individual therapy adjusted accordingly.

Dr. Nadauld continued with a description of Intermountain Health's multi-state coverage as both hospital system and insurance provider with about 5 million participants. They have the distinction of being an 'open system' where both non-affiliated physicians and patients can utilize their facilities. They had a debate of developing in-house molecular characterization facilities or outsourcing it, and chose to go the in-house route in order to have control of the data, decrease the turnaround time for molecular tests, and gain cost efficiency.

Intermountain uses an informatics system called Syapse, and DNANexus and N-Of-One to assist with data interpretation, as well as an electronic portal for ordering tests and receiving results. He continued with preliminary results of personalizing such oncology care (n=198) where 41% of their molecular findings resulted in 'immediate change' in the patient's treatment, and 38% 'prospective change', which he said was surprising how high these numbers were. Details of these results (and many others that he presented) will be published soon, so it may be worthwhile to keep an eye out for it.

He closed his talk with the following anecdote of one 40 year old patient with metastatic colorectal cancer, having exhausted all treatment options and left with only a few weeks or months to live. After multi-gene analysis, a HER2 amplification was identified, which occurs in 3% of colorectal cancer, and Dr. Nadauld showed serial CT scans with dramatic progress over the subsequent four months to a near complete response. The patient survived two years.

One day, this patient was coming in for a regular visit and exclaims, 'A disaster happened.' This raised concerns from the physicians that it was a complication or other setback; they waited to hear what the disaster was. 'I wasn't planning on living this long, and I let my cellphone plan expire. Now I have to get my cellphone plan renewed.'